Texas Waffle, Our Trip to Kid n Ewe in Boerne 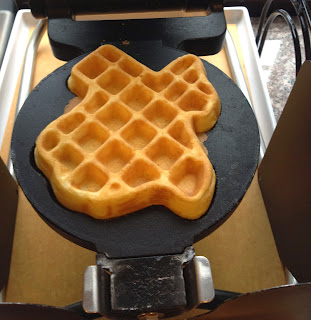 We had a great time at the Kid n Ewe show in Boerne, Texas. It started out as a blur of activity and ended on a calmer note. More about that later.

Texas is a special place. Full of friendly people and from my point of view at the Kid n Ewe show, fiber art enthusiasts of every kind. You know your in Texas when you can walk into the grocery store and find a great bottle of wine to share with friends. If you are confused about your location the next morning never fear, the Texas Waffle is here!

I was pretty amused by all the conversations in the Comfort Inn dining room the next morning revolving around the Texas Waffles and wished I could make a You Tube video but I had a booth to get back to.

The first two days of the show were a blur of activity. I didn't have time to get pictures of the booth until Sunday, but I did enjoy connecting with some friends at the show. Here is an overall of the booth. I had many friends helping me in the booth this year which made it fun and easier to keep up with all the activities at the show. 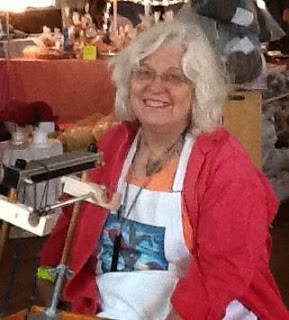 Lynn was there helping with everything as usual... 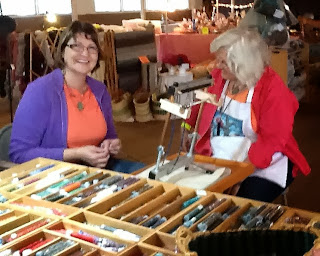 and Elona, who demonstrated the leather wrap bracelets and kept everyone entertained and informed. 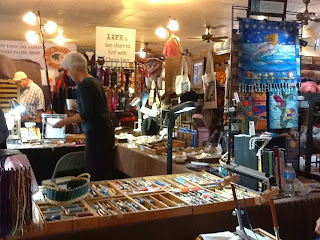 Here is a picture of Janet who was on the move most of the time...

and here is a shot of the demo table with a big selection of bracelets that she and Elona had made.  We had demonstrations of leather wraps, tapestry bead cuffs, affinity style and traditional beading as well as tapestry weaving going on through the entire show. 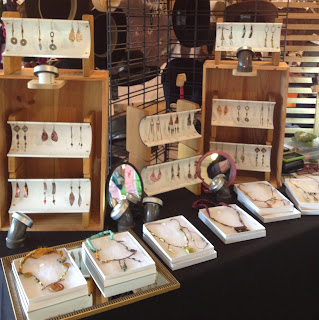 Here is a picture of Libby's beautiful Wild Woman jewelry that was part of the booth this year. 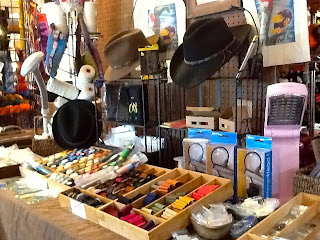 Another display area with cords, threads, tapestry warp and hat bands on display. 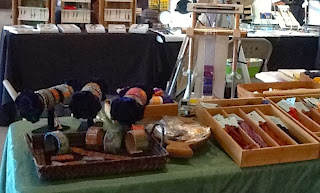 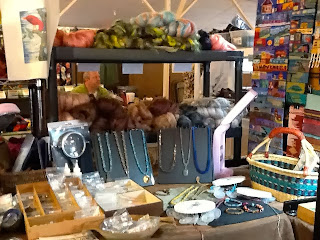 and new for this show we had Kumihimo braiding supplies, models and demonstrations. 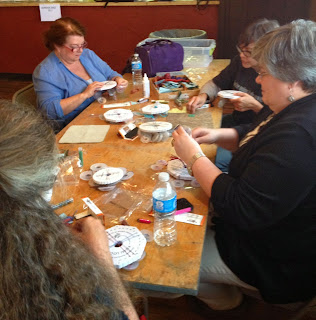 The Kumihimo lead me on a new adventure. There was a class scheduled on Kumihimo braiding for the show but the teacher had a family emergency and had to cancel. Since I had brought all the supplies I ended up teaching the class of five.

Here is a picture of some of the class getting ready to try some braiding on the portable Kumi looms. 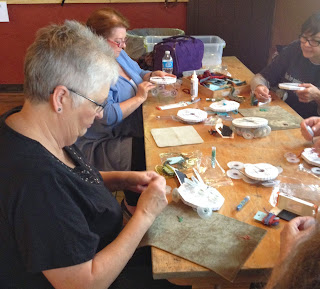 We set up an eight strand round braid, talked about some variations and finishing techniques and also added some beads to the braid in the two hour class. 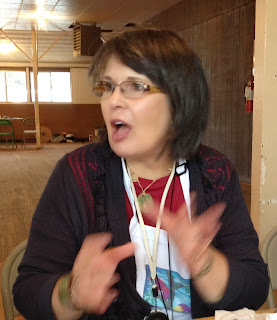 One of the students took this photo of me with mouth open and hands blurred. I think she really captured my essence!

After the class the students visited the booth and I have to say I did not come home with any Kumi supplies left. Thanks to all of you for being so gracious. Considering the last minute preparation for the class we all seemed to have a great time and the braids of hand dyed pearl cotton were beautiful. 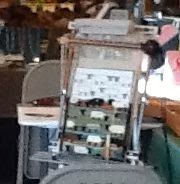 I also spent some of my time tapestry weaving on the sheep sampler, 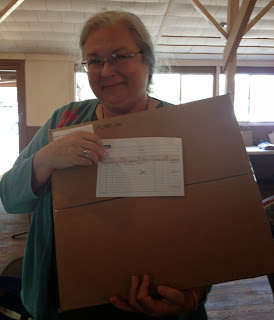 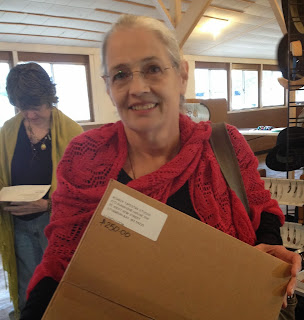 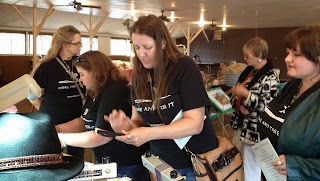 visiting with friends. It was fun to see Lydia from our tapestry diary group and to get another visit from the Viking Girls. This year they were adding Ymmyarns silks to their projects. I hope to have a picture from them soon.


After the show was over and the booth was all loaded Lynn needed to stay a few more days for some family business so I was driving back to Oklahoma alone this time. I am always anxious to be traveling alone because my directional skills are impaired and even with GPS any trip is an adventure of unknown outcome for me. I do not exaggerate as those who know me can attest. I am endowed with the ability to walk into a store,shop for a few minutes and not know which direction I came in. Let me just say the trip home was interesting. Without understanding how, I had managed to choose a route home that I had never been on before. I made several detours through Texas towns trying to get back on the interstate but the real fun began on the last leg of the trip through Oklahoma.

It was Monday and I was tired and instead of taking me on Highway 75 South my route took me on a series of two lane back roads. I decided as I was nearing home with 2 to 3 hours of light left and a full tank of gas that I would just relax and enjoy it. It was a beautiful day and I drove through small towns with streets festooned with flags for Veterans Day. There were cows, sheep and horses. Much of the drive was  rolling landscape with streams of light piercing the clouds all the way to the earth in a manner more often seen in photos than in real life. I relaxed once I found myself on old Bixby Road as I assumed I would end up in Bixby at some point. Both hands on the wheel, head resting on that device in the car meant for this purpose and at a leisurely and legal speed limit I rode the curves of the land as if they were waves. I thought about stopping to take some photos but didn't want to disturb the magic of the moment, so I drove on
content with the idea that I would absorb the essence of the place and hope to set it free in a sketch or possibly a tapestry at some point. There is no place like home if you have the mind set to see it. 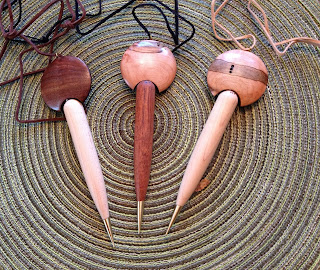 One of the nice surprises when I returned was a box from John Moss with bobbin bowls which are already on their way to a new home and new "Keepers"( those magnetic tapestry awl tools) I like so much. I have two of these left so contact me if you are needing one. They are beautiful and functional. What more could you want?

It has been a beautiful October in Oklahoma, cool, crisp with lovely light and some needed rainfall. What more could we ask of the weather? 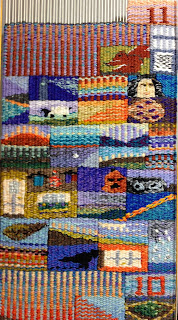 I have been busy as a squirrel getting ready for the Kid n Ewe show in Boerne, Texas next weekend. No matter how well I plan it seems the last few days are always hectic and filled with long lists of things to be done. Adding that to the continuing work on the Fiber Studio building and trying to get some weaving in every day has made it a fast moving month. If you want more information on the Kid n Ewe show there is a link to the right on the blog and also some information under new shows on the right.

Never the less I have managed to keep up with the tapestry diary. November has begun! At this point in my diary journey it does not feel like days have actually happened unless I weave them. This month has everything from tea towel exhibits to pumpkin oatmeal raisin cookies, spray paint adventures to skidding squirrels all in those one by two inch squares! Of course there is also government shut down woes and personal trials concerning the wrong door on my studio building and trying to get the situation taken care of and small accidents around the house, but I do admit I try to tread lightly on the less positive days.

I have been continuing to work on pick and pick and introducing new colors from my lovely Ymmyarns collection. I have not used any cartoons this year but have kept a small notebook where I sketch ideas for the days. I will try to share some of that when I finish this years diary as I think the sketchbook may just last long enough to get through 2013.

I have also finished new jewelry, made progress on the Sheep Breed sampler and a very small amount of progress on the Mango Hunters, but I will wait to share some of these things either at Kid n Ewe or shortly after because most of them are packed up at this point. If you are on the mailing list I will be sending a coupon for the show soon... I hope to see some of you there. 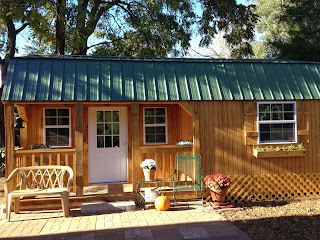 Here is a shot of the outside of the studio with the new door. it is coming along nicely.

The inside still has much work to be done but as of this weekend the floor is finished. Big thanks to my husband Francis and son Josh who laid the floor while I was absent all day at the Tulsa Handweavers meeting. 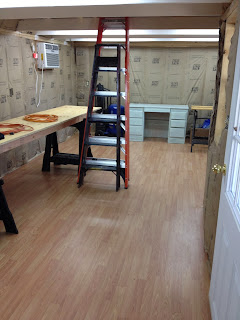 Here is a partial shot of the inside with the new floor, 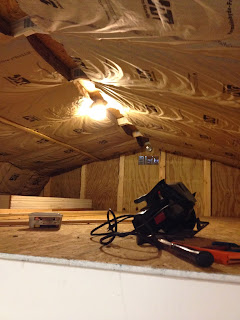 and an older shot of the attic loft before the insulation was finished.

There are two lofts on either side of the building where the ladder is in the previous picture and I don't think I will find it difficult to fill them. 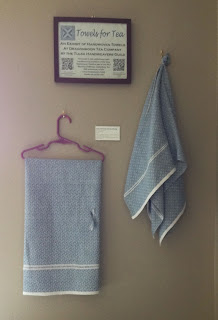 Arleen garrison, Lynn Tedder and I hung an exhibit of Towels for Tea hand woven by members of the Tulsa Handweavers this month at the Dragonmoon Tea Company. The Dragonmoon is just north of 21st Street on Harvard Avenue in Tulsa, Oklahoma.  It was fun to do and the reception they organized was lovely with lots of the tasty treats that the Dragonmoon is known for. If you are close to Tulsa please stop by and have a look. The towels will be on display at least through November and if you are interested in better photos and close up views of the individual towels please check the Tulsa Handweavers website. There is a link to the right on the blog. 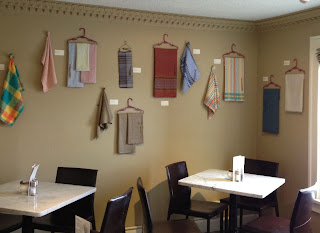 The towels circle the main dining room and there  are a variety of wonderful examples. 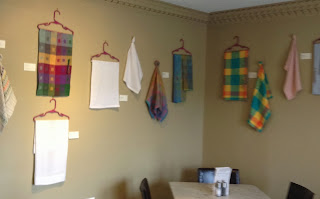 Moving around the room 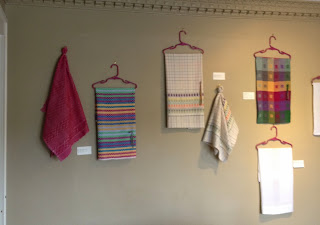 delightful and creative towels adorn all the walls. 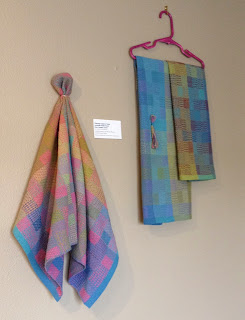 Here is a closer view of my contributions, from right to left Rose Garden, Lavendar Fields and Flamingo Lagoon.

I had some fun playing with 4 shaft Summer and Winter with  9 colors of 8/2 cotton.

I hope everyone is enjoying Fall. I still have blooming Hibiscus and Azaleas outside!
Posted by Unknown at 12:09 PM No comments: