Following My Path Through March 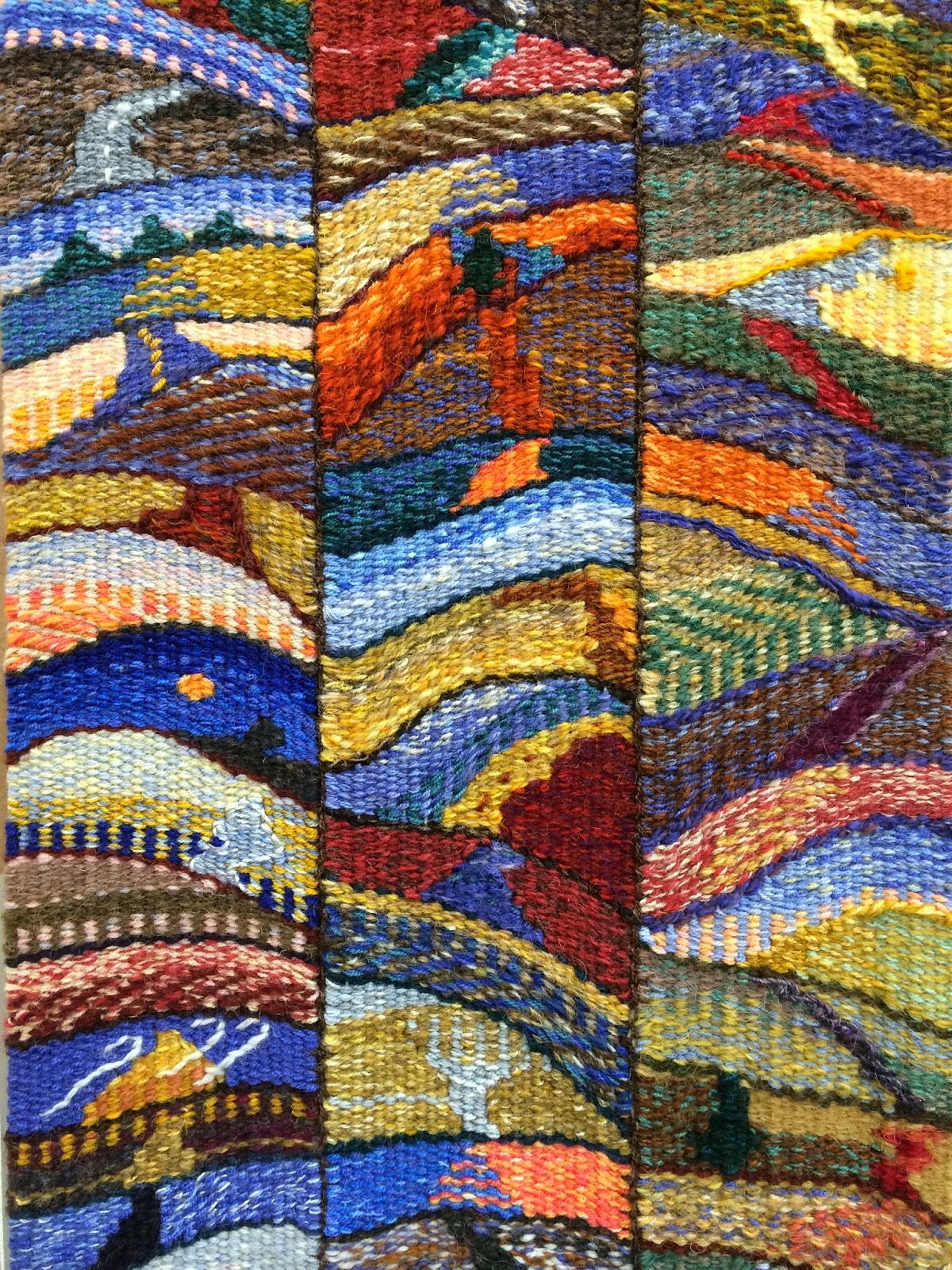 Following the path through the 2014 diary this year has been great fun. I've been enjoying the palette which is so different from last year, the concept of the path has been interesting to work with and the technique study from the Threads Course in Tapestry by Mette Lise Rossing continues to be inspiring.


As March matures I find myself adding more greens to the color mix as they are finally popping out in the landscape here. 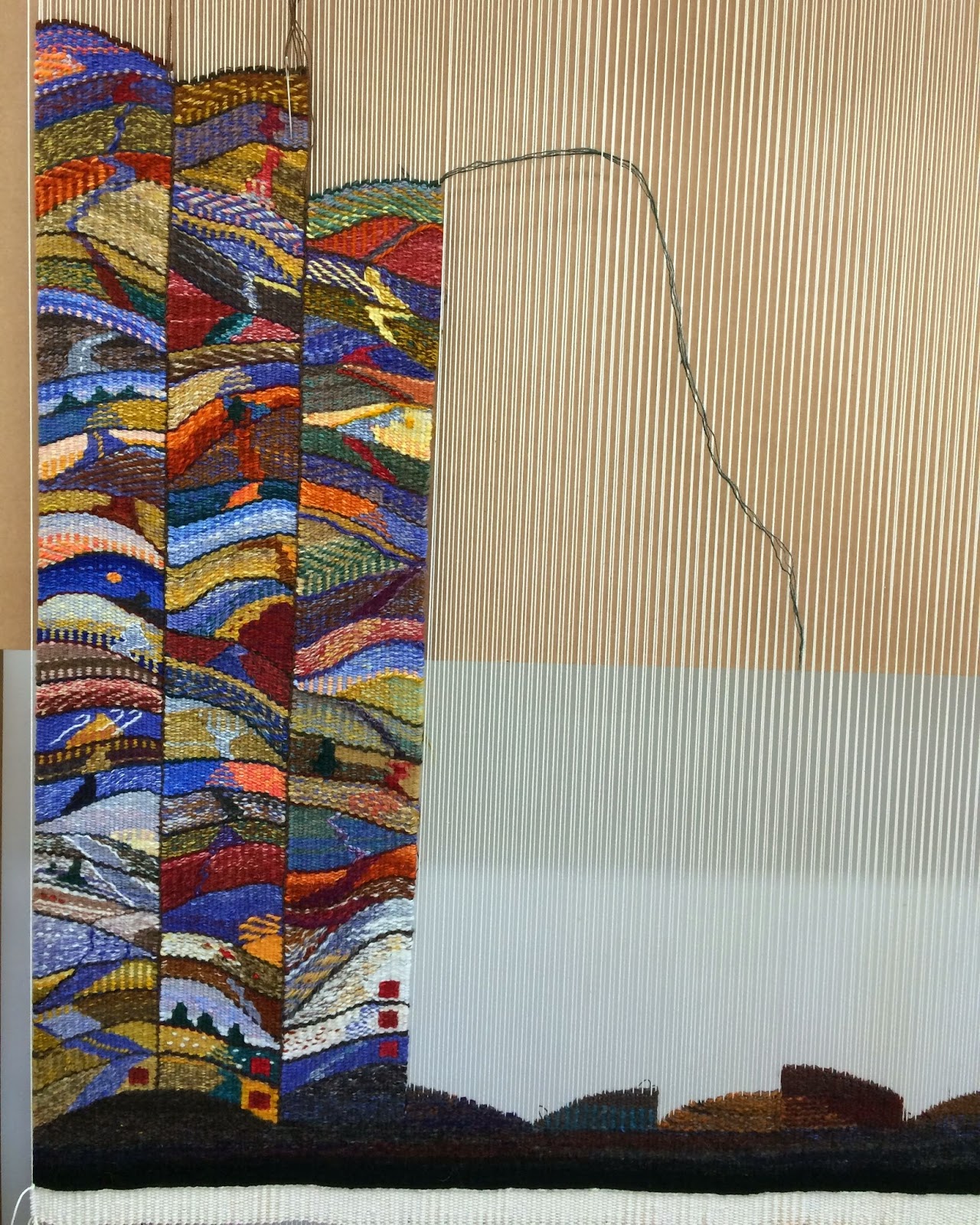 This is an overall shot through March 24. It has been fun to watch how the addition of the monthly columns changes the look of the overall design.

This month I have worked some new to me techniques of color effect in plain weave and some sumac variations that I have not tried before. 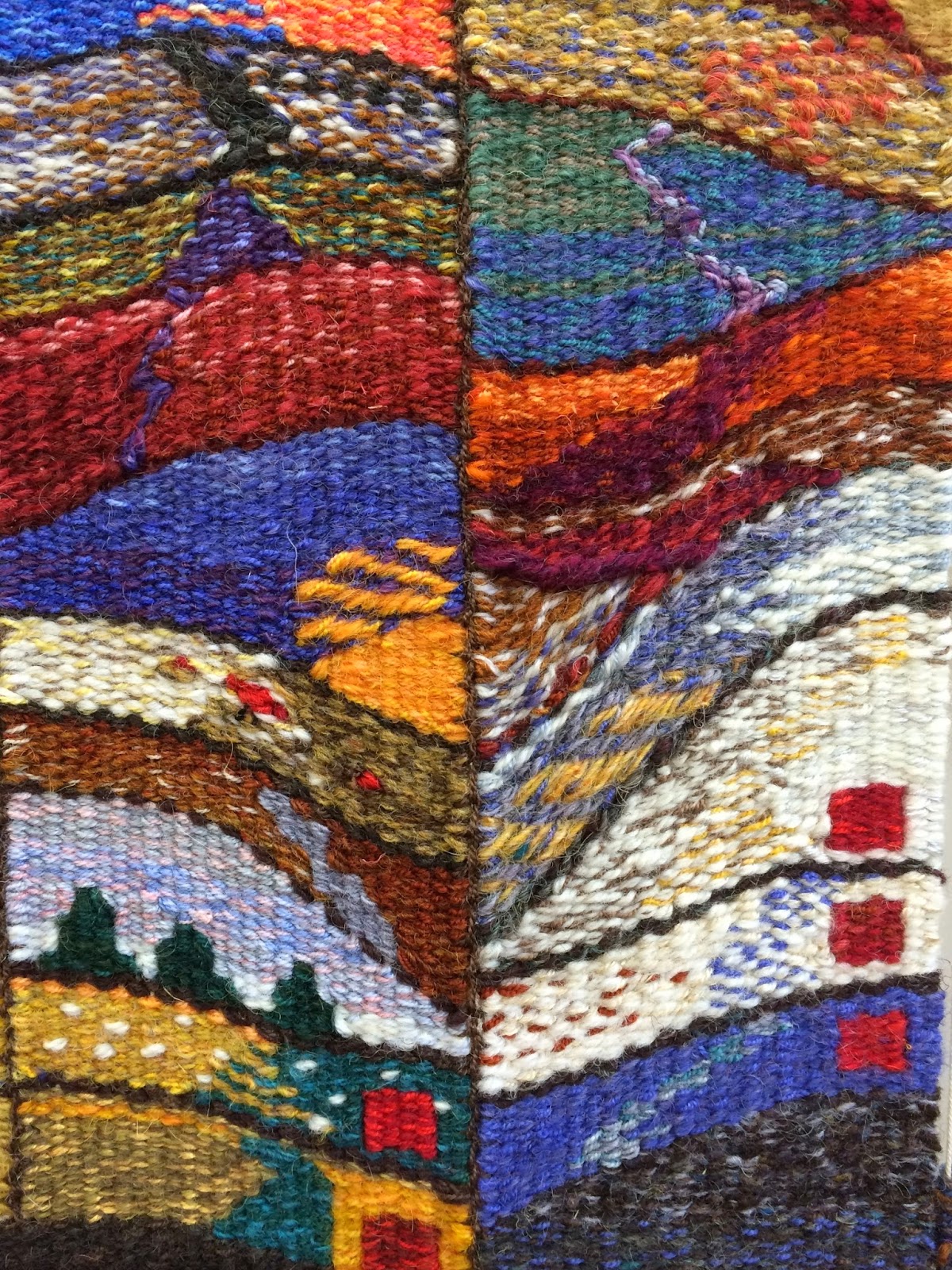 Here is a close up of the beginning of Feb/ March with March to the right.

I have continued doing my red squares for the month designations so this month there are three for March.

Continuing with some of the techniques I have already tried like various hachure treatments and twill with ground weave has been helpful, as by now those things are coming pretty naturally to me.

On the 2nd of March I wove a blue violet path using Variation 62 on page 30 which is a plain weave with brocaded inlay. I used a thinner yarn for the color effect and the final look is much more subtle than weaving a separate path in the BV would have been. In this technique the yarn is held to the back and picked up when needed which offers a lot of freedom as to how it is used. It was a very snowy day in Oklahoma!

On March 3 I used variation 63 with the color effect woven in gold. The main difference here is that two pattern wefts ( a complete pass) are laid between one or more plain weave wefts. Again a thinner weft is used for the pattern effect and the yarn is held to the back when not in use.

March 5th I began with some of the sumac variations. I use sumac quite a bit for outlining and adding detail but I wanted to try some of the more unusual variations in the book. On this day I used variation 79 page 34, a closed sumac which wraps around three warps and back one. Wrapping over three warps at a time gives a much more textural look. 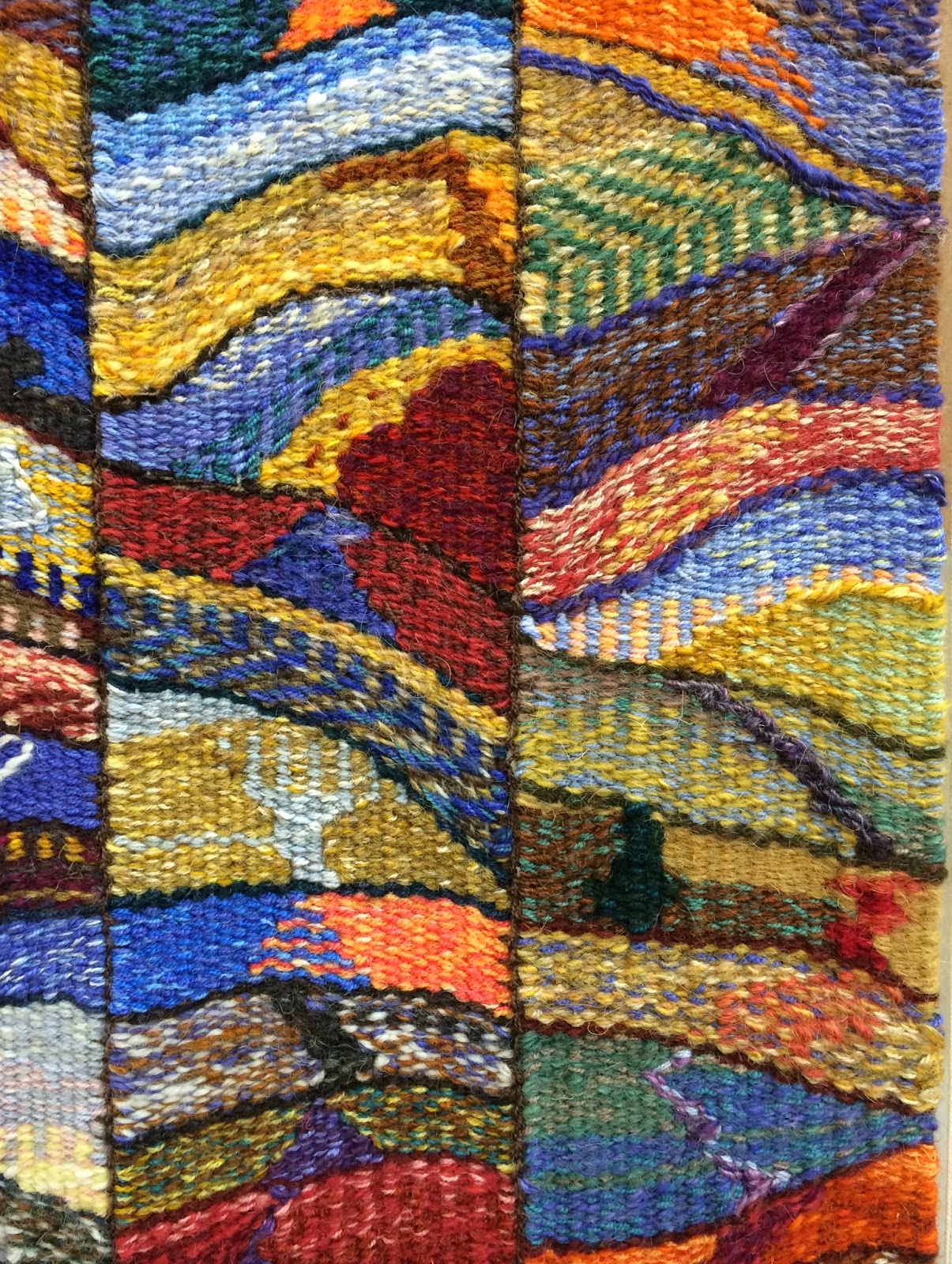 Back to some color effect in plain weave on March 8 from variation 65 page 30. This is the one that has a light value orange path third from the bottom right of this photo, which is also a subtle pattern effect. Here the pattern weft is laid partially in with the plain weave to form the pattern.

On march 10 variation 88 page 36, the main difference here from the book is that I was working up a diagonal line rather than straight across as in the book diagram.

March 11 employs a little closed sumac and on the 12 another version of some plain weave with color effect, variation 66 page 31. On the 13th I used some closed sumac to outline the red violet path and on the 14th variation 77 page 33 shows a double line of closed sumac in blue violet wrapping up the hill instead straight across as in the book. I thought that was a nice textural effect. 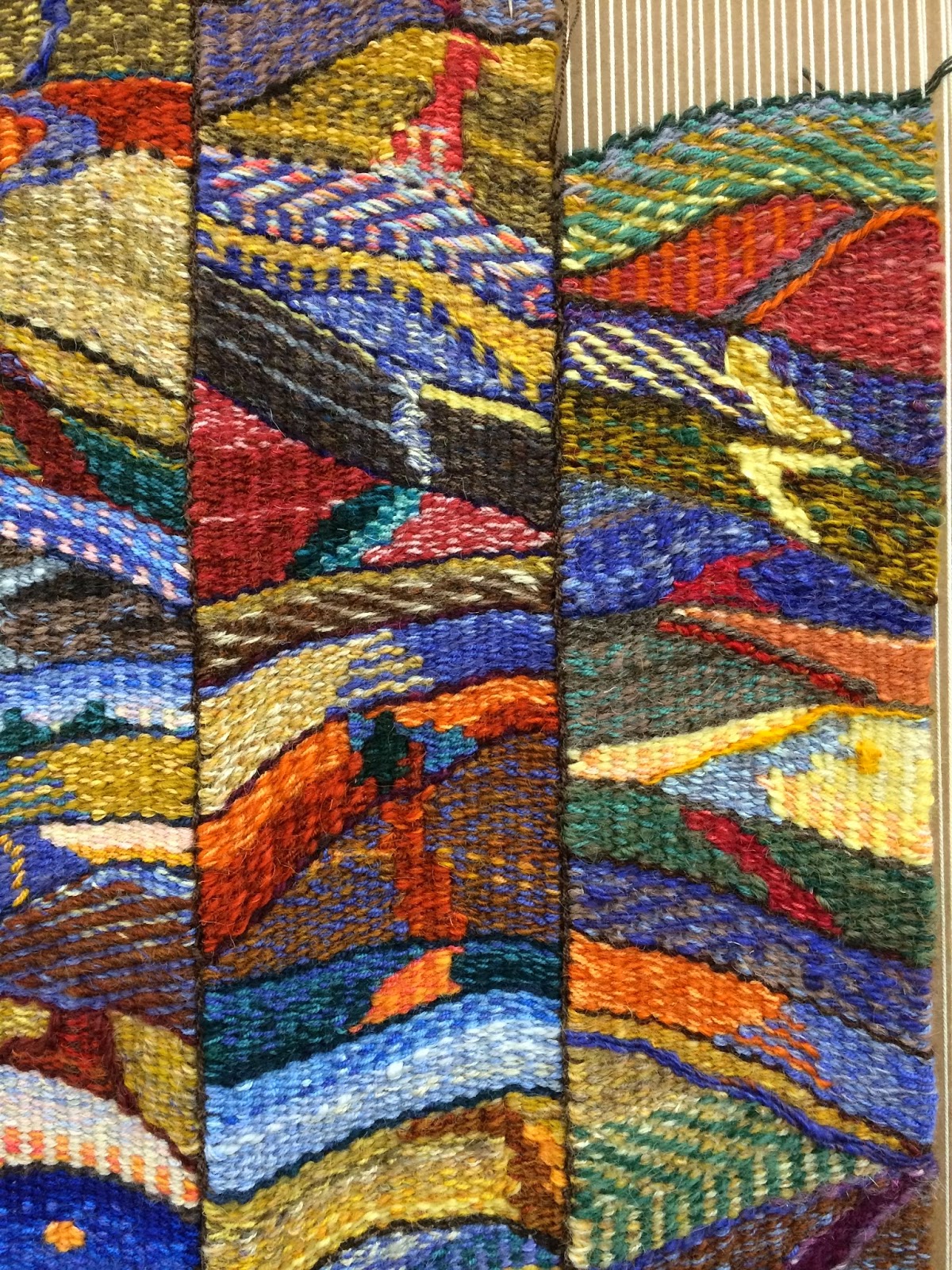 March 18 has more closed sumac in yellow orange outlining the path and on the 19th variation 91 page 37 is used in the red path line. It is a double row of sumac with an extra textural effect and I have used an outline of a single row of plain sumac right above it in a contrasting color.

On the 23rd of March I used a little plain sumac outlining again in the orange color.

There are still a few days left in March to experiment with  more sumac variations that look interesting. 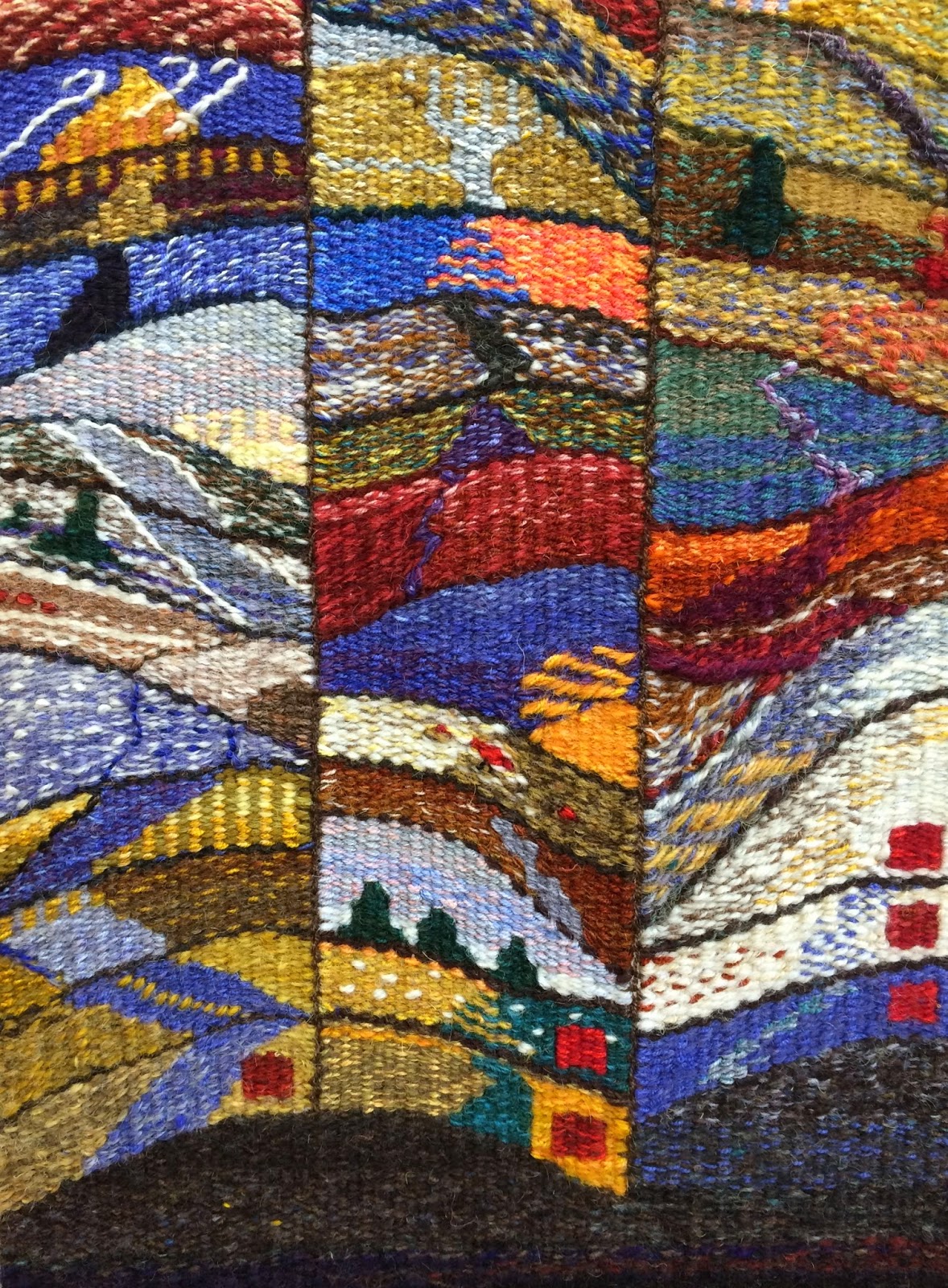 I took a couple more photos showing the three months together as I am enjoying the evolving color and pattern of the months joining together.

Here is the top with March to the right. I will catch up with the end of the month in the next week or so here on the blog. 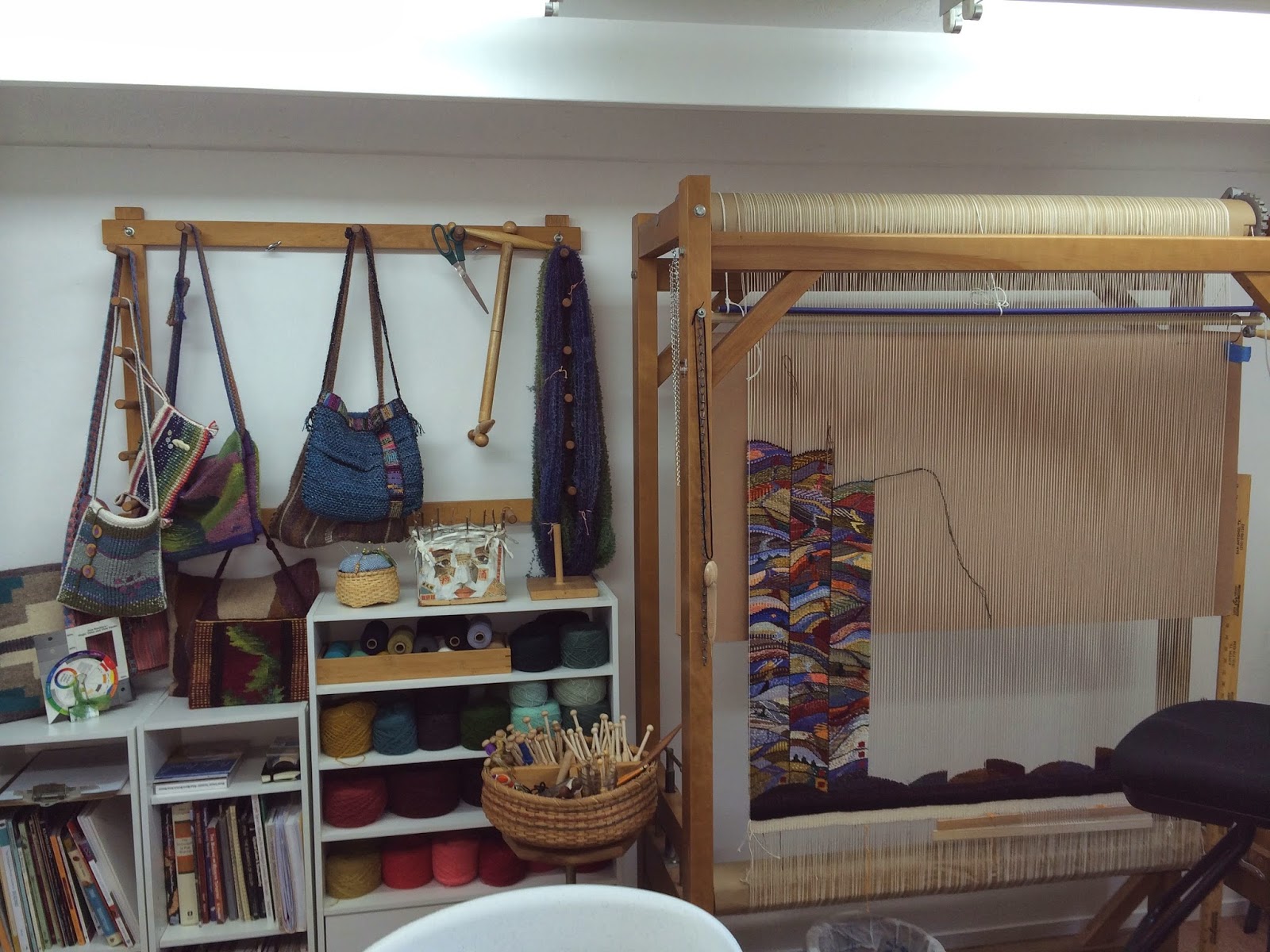 How about a photo from across the room. The new studio building is maturing nicely and this last weekend we did get some trim work done. I use the term " we" pretty loosely as it was Mack and Josh who actually did most of it. 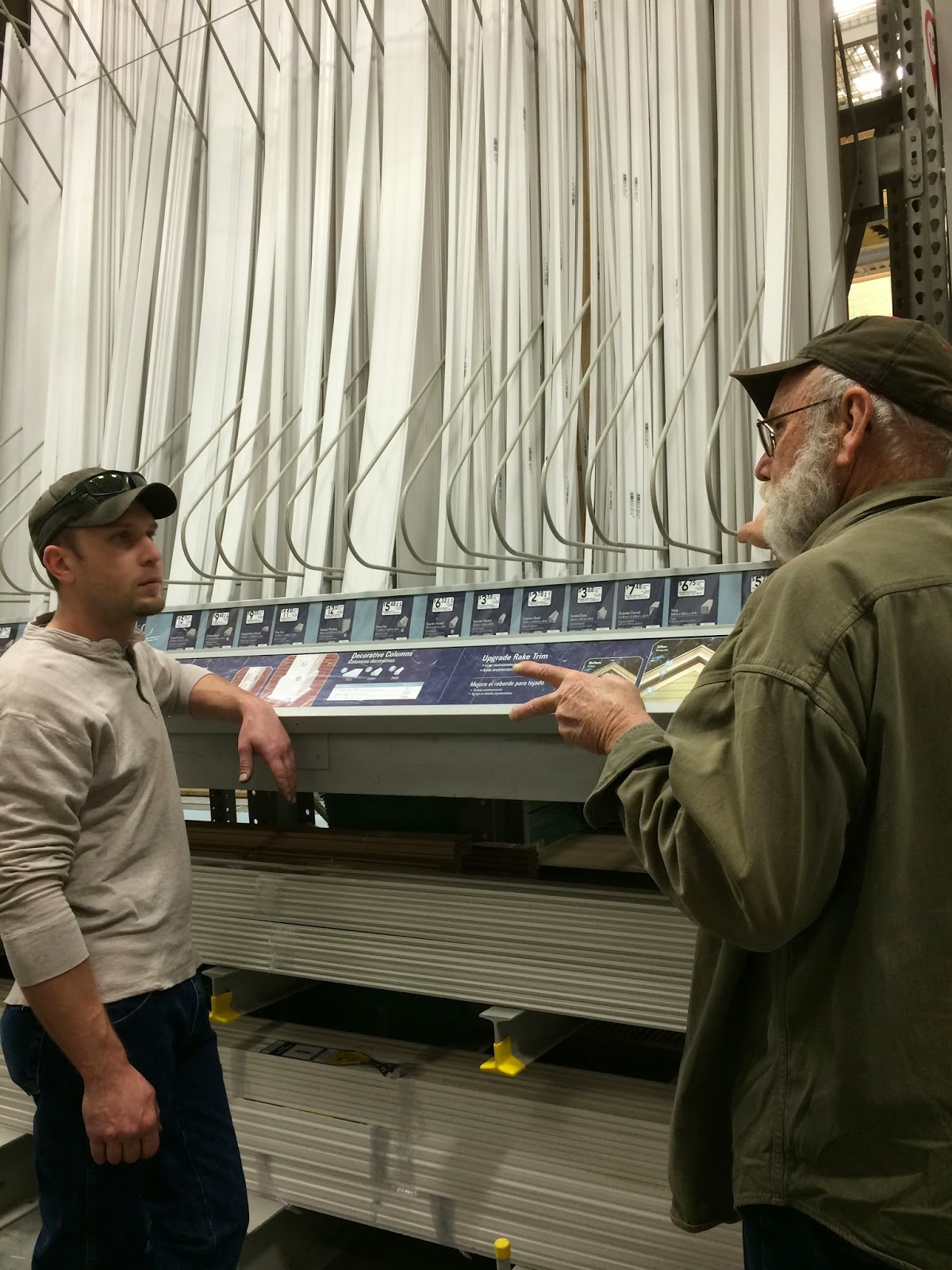 They insisted that I come with them to pick out the trim but the only input I had was to take this photo! 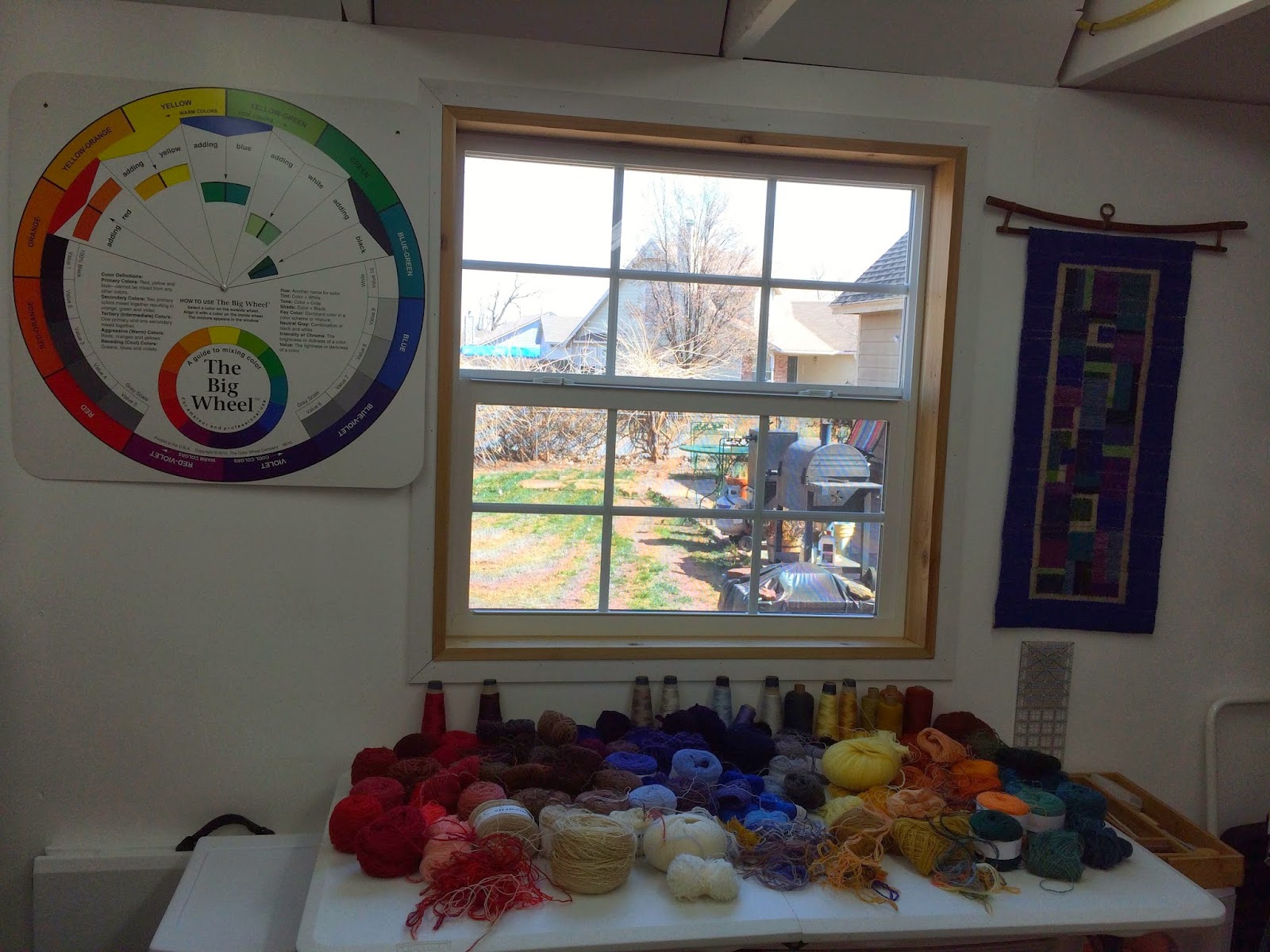 It really looks nice now that the trim is done, especially around the windows and door. 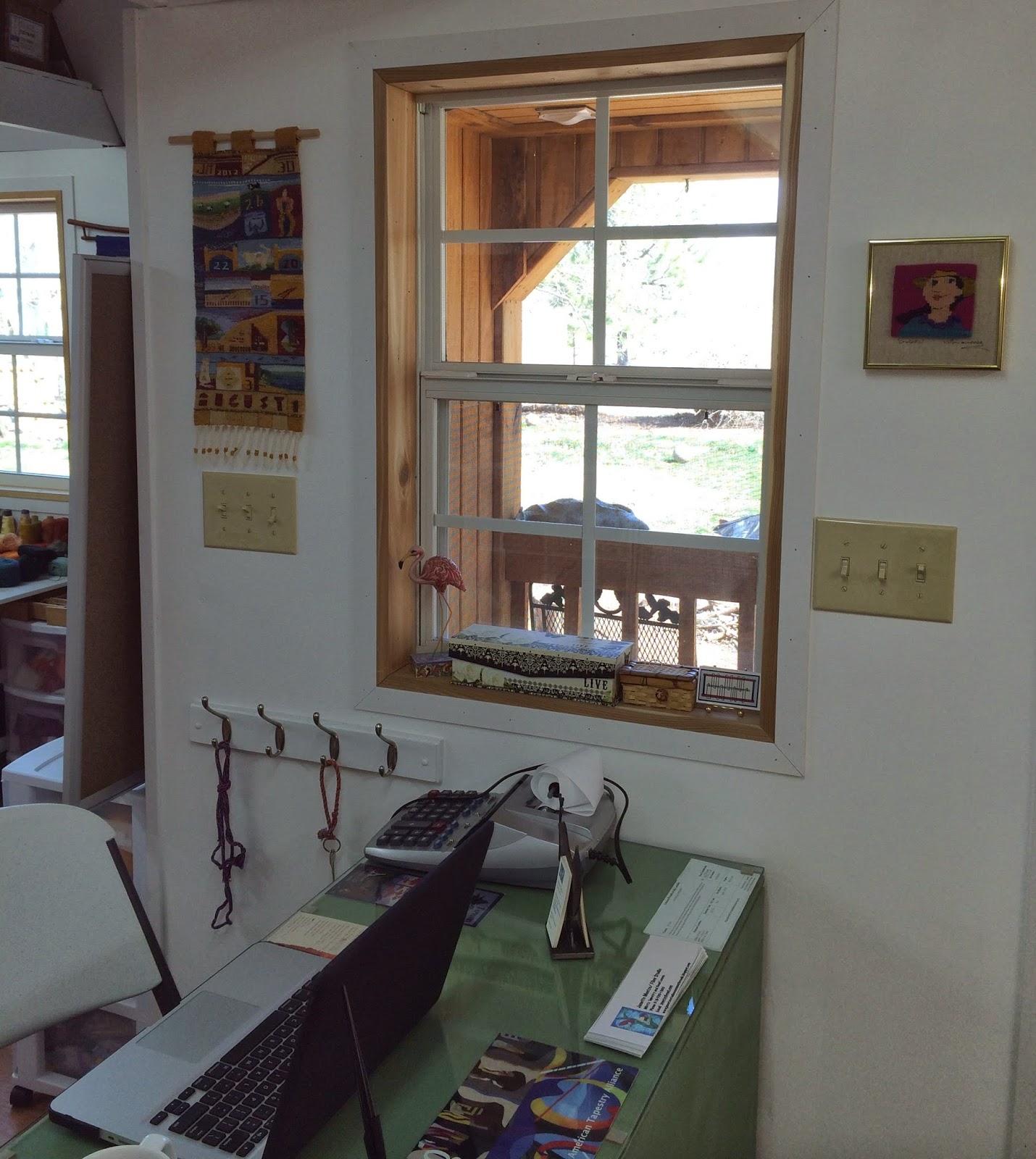 Such a little thing but it definitely looks like a real room now! 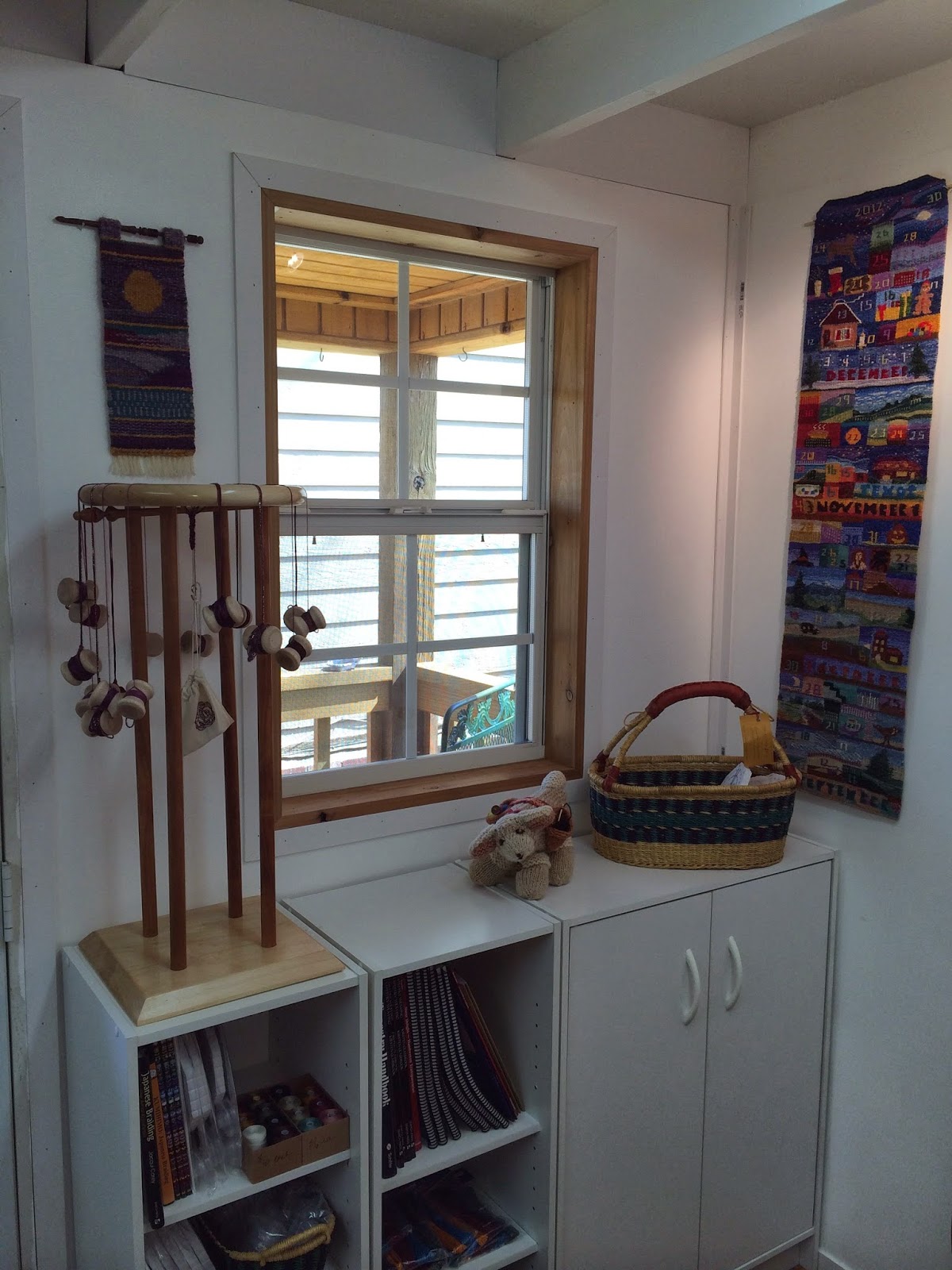 I was planning to paint the cedar trim white but I like the contrast so I think it will just get a coating of Danish oil instead. 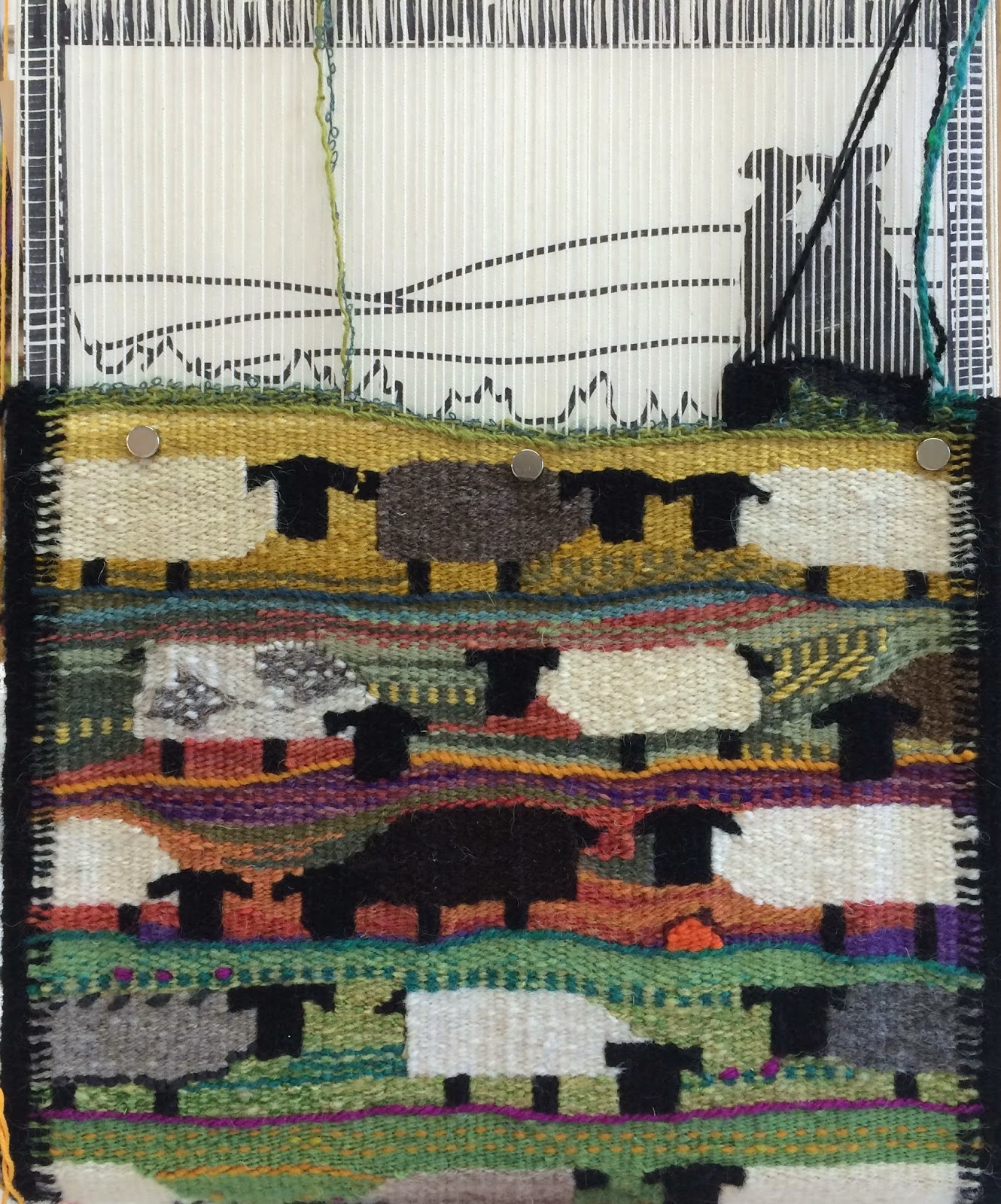 With my next post I will update the show listing but I am getting ready to do the Yellow Rose Fiber Producers show in Sequin, Texas the first weekend in June.

The plan is to finish the Sheep Breed Sampler and have it on display at the show. It is getting there and I have been working on a drawing for a new cartoon to take its place on the 16 inch Mirrix. I hope to see some of you there!