Here is 2015 at the end of June. The year is half full and weaving its way through the Summer.

I probably should have written a blog post right after the Fiberworks opening at Living Arts Gallery in Tulsa, Ok but honestly I think I was a little overwhelmed at that time. It was pretty exciting for both of my entered tapestries to win awards and a Facebook post was all I could manage. 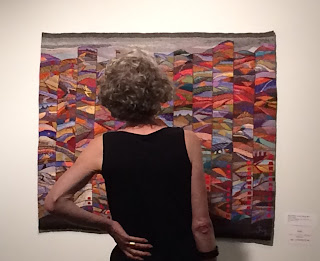 This is my favorite photo from opening night of Red Dirt Days/ Journey Through 2014 which won the Best Of Show award sponsored by the 108 Contemporary.  There were a lot of people in the Brady Arts district for First Friday and most of my photos of the crowds are not that good. 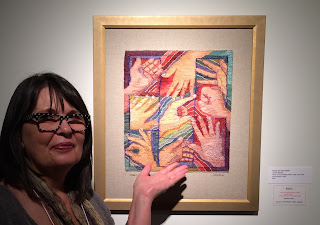 Here I am with Hands On/Slow Selfie which won the Excellence in Hand Weaving award from the Tulsa Handweavers Guild. It is great to be part of an organization that supports the art of weaving in this way. 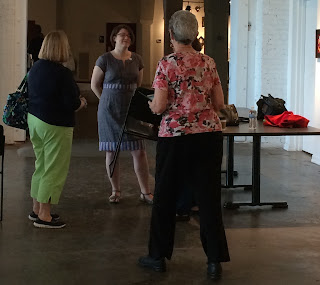 This photo is from the morning after the opening at the Juror's Critique. In the center is artist/ juror Lindsay Ketterer Gates  who gave a thorough run through of every piece in the show. I was so fortunate to be able to attend this year as it was an enlightening glimpse into her decision process as well the work displayed. 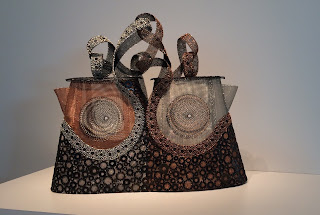 Lindsey was very busy that week as she also had many of her pieces on display at the 108 Contemporary gallery. Here is one of my favorites. Her work is intricate and beautifully made. 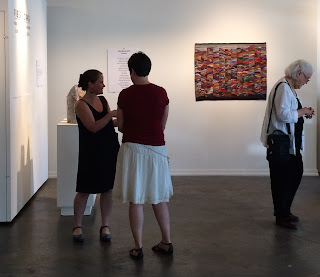 Here is another shot from the critique. 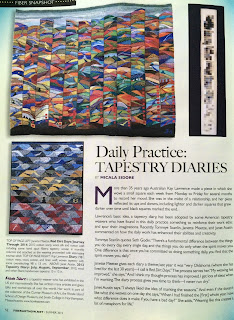 Not long after the opening the new issue of Fiber Art Now was delivered and contained a wonderful article by Micala Sidore about the practice of weaving a Tapestry Diary. The article showed Red Dirt Days and also featured the work and words of Tommye Scanlin, Janet Austin and Kay Lawrence. 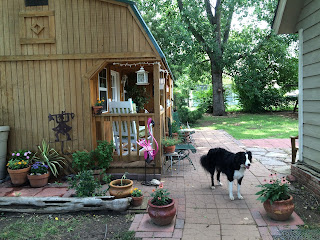 After having been gone for a week to Eureka Springs where I did some painting and then coming home to the opening activity it was nice to take some time to put the house and studio in order, plant some flowers and take some personal time. 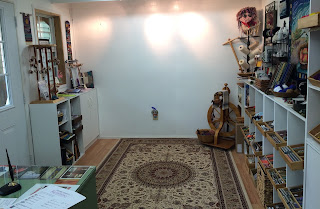 Inside the studio the front wall is prepared for my new loom. There is even a new rug to put it on but no loom yet. 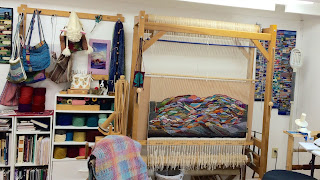 On the other side of the building is 2016 in progress. 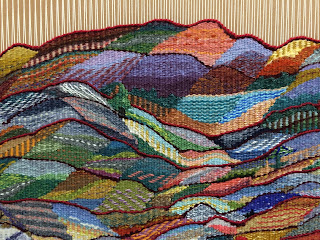 I took a couple of details this morning of 2015 after the month of June was complete. It has been an interesting Spring with lots of rain, a few storms and even flooding. The lakes are overflowing in many areas and normal recreational activity at some of them was halted for a time. Such different news than we have had the previous couple of years! 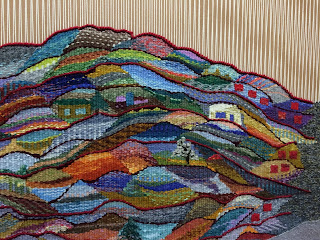 It does appear that the Summer has caught up with us the last couple of weeks though. I am looking forward to weaving the rest of the year as it unfolds... 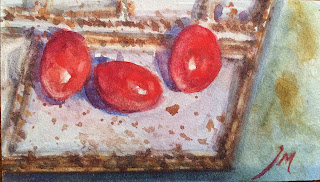 and the grape tomatoes are pretty enough to paint.