The Wait is Over 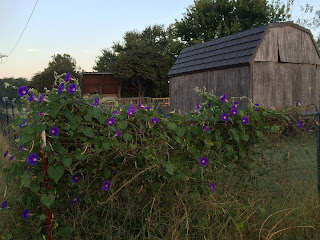 It is Fall in Oklahoma, clear, crisp mornings, bright blue skies and perfect weather for walking the dogs and Morning Glories.

While waiting the last week or so for my loom to arrive I have been staying busy in the studio as the anticipation mounted daily.

Weaving on the tapestry diary for 2015 has been coming along, it is always exciting to shift into a new season and try to portray the subtle changes that take place daily. 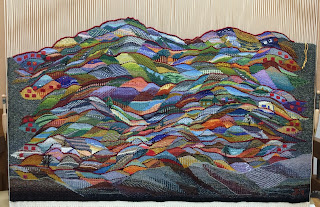 Here is a peak at the end of September. I have continued to work on tiny bits of real scenes from memory and even included a woven memory of the lunar eclipse on the 27th.

I have enjoyed working with the hills and valleys of the year 2015 and have started to think about where the next years journey might take me. 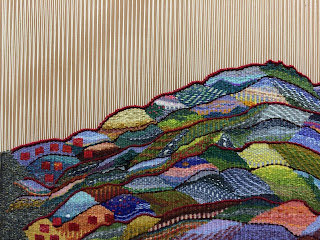 Here are a few details of the month of September, a fairly steep climb at the beginning of the month 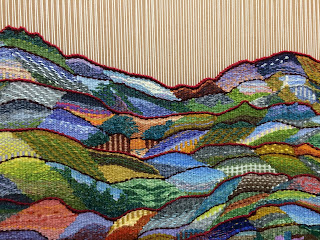 followed by a valley with scenes of hills, rivers and skies. 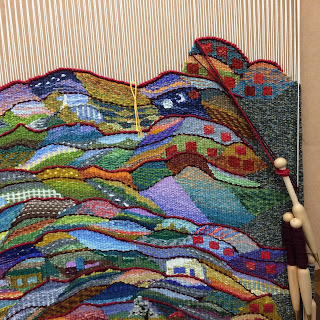 I took this one yesterday after completing October third. It has a fairly good view of my three phases of the lunar eclipse. We were so fortunate to have clear skies that night which made for great viewing. 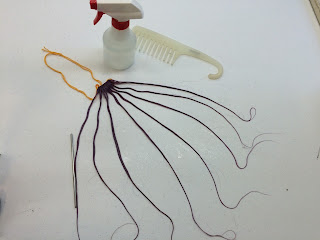 I did get my hair weaving set up while waiting for the loom. I wet the hair extension down 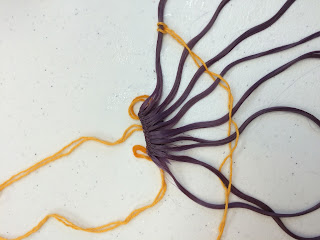 separated it into weavable sections 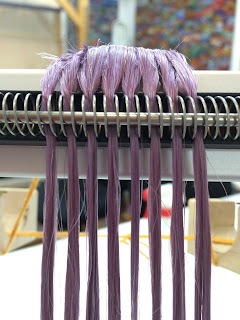 and tried organizing it on the coils of my Mirrix Lani Loom. 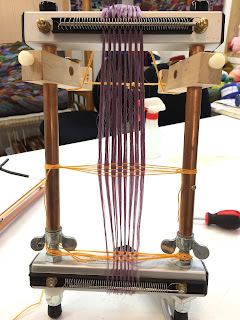 Here it is all set up and ready to weave. I envision a sparkly hair ornament tapestry. It will be interesting to see what I get. 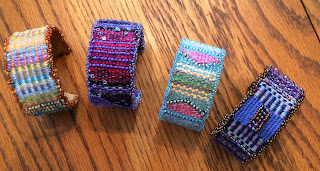 The Lani Loom is always busy. Here are the four tapestry bead cuffs that came off the last warp. One of my favorite projects and a great way to learn some tapestry techniques and just play with color and design. 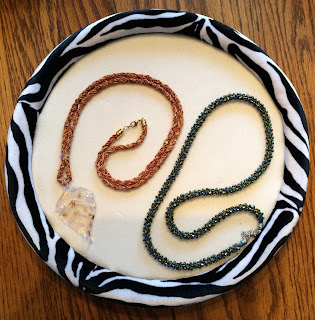 I also finished up a couple of Kumihimo projects, a golden braid with a glass leaf ornament for Fall and the last model of the kits I have in the shop in Peacock colors. 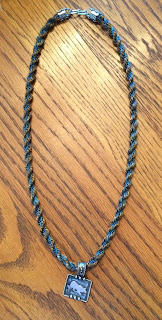 I also designed a braid for
a silver pendant with a copper Border Collie on it which turned out quite nice. 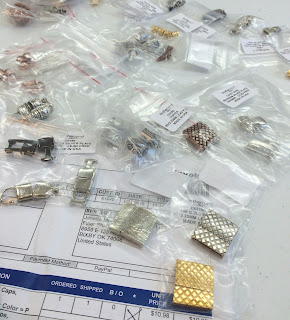 New things for the shop include a large shipment of findings for Kumihimo and woven beaded jewelry. I found some nice ones! 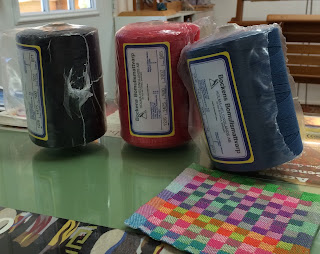 Also some 12/6 cotton seine for tapestry warp in colors from Glimakra. I want to experiment with these soon. 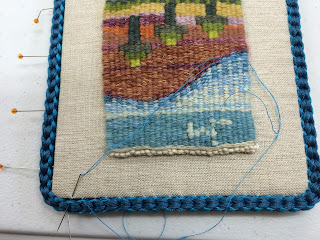 I also finished a square braid of 10/2 pearl cotton to use as a frame for one of the small tapestries I have been finishing.

I stitched it on to the front after pinning in place around the edges of the linen covered board. 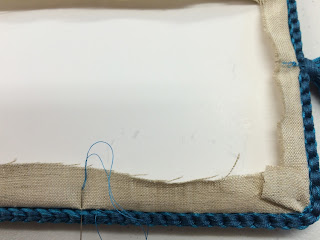 Then I stiched again around the back. 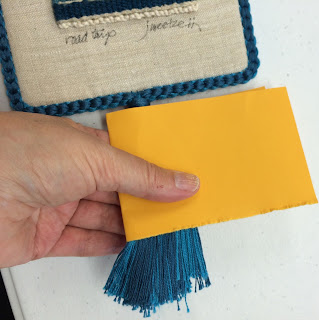 Next, the trimming of the tassel where the two ends came together. I thought os so many ways to finish these ends that further experiments may be needed. 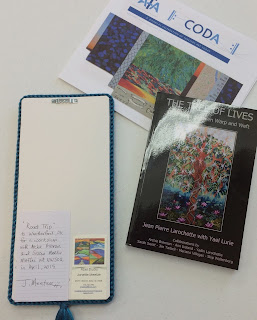 Then I cut another piece of mat board, attached to the back with some acid free glue and included a little information about the tapestry with a business card and a sawtooth hanger.

I also included some recent reading material in this photo. I printed my ATA coda so that I could read at my leisure. 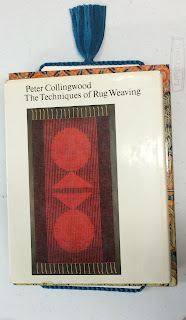 Viola! here is a photo hanging on the wall. I am happy with the way this turned out and it is satisfying when two interests on parallel paths suddenly cross in a happy way. 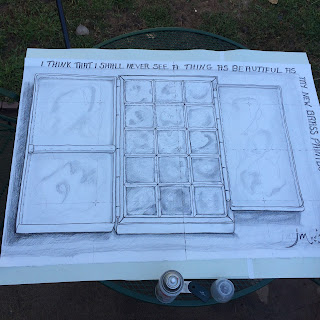 So finally the day the loom was due to arrive came along. It was a clear and windless morning and I stayed busy putting some finishing touches on the new cartoon and then taking it outside to give it a couple of coats of fixative. I anticipate that the lettering will be a challenge. 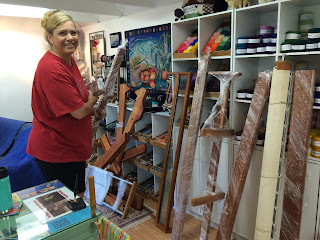 Right on time the movers arrived with the loom. here is Sandy, she and her husband brought the loom from New Jersey and helped us load it into the studio. 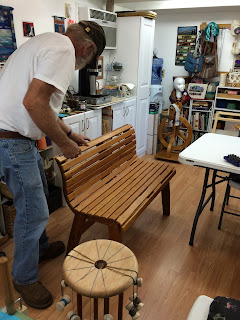 After they left we got right to work getting it put together. When I say we I mainly refer to my role as reader of the directions, organizer and tool selecter, Mack did most of the work. 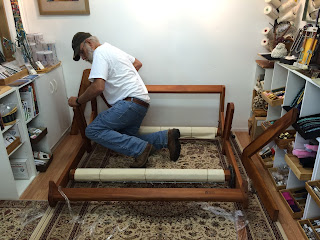 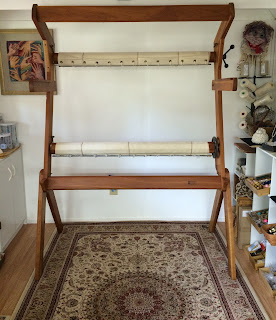 When we left about 2pm for lunch it looked like this. 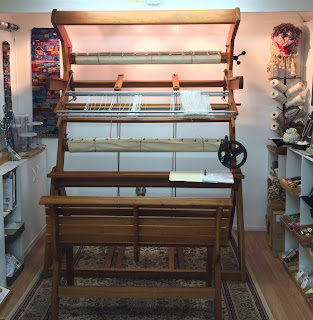 Here is a picture after it was put together. I had lowered the heddle bar to make it easier to count the heddles. This is a very nice feature of the loom. A Fireside 48 inch Cantilever tapestry loom, so exciting!

So, an interesting little side story; the next day Mack was watering some outside plants around the studio and found a washer. We quickly referred to the labeled packages of hardware for the loom and discovered a note that the cloth beam washer was taped to the cloth beam. It must have fallen off while the loom was being carried into the studio. Hmmm, another half day of work to take the loom apart and place that washer on the cloth beam between the worm gear and the side bar. Yikes! It is once more back together including the missing washer though. 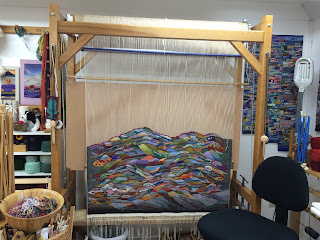 I the decided that I might want to use 10 epi as the sett for the Paintbox tapestry so I placed an order with Glimakra and had a new reed at 10 epi for the Fireside Cantilever Loom very quickly to add to the the 8 dent reed it came with.

Next step, winding the warp, maybe today. From my spot in the world to yours, happy weaving and happy Fall.